“Damn I can see why this kicked my ass six years ago.”

Less than an hour before this revelation, I strode from my apartment to Broadway street and unlocked a Mercedes-Benz I’d reserved.

For the past few weeks, I had been enjoying the service Car2Go. They have a fleet of cars parked throughout Denver. If you want to drive one, whether for a few minutes or a couple days, you click a few buttons on their app and you’re in.

We didn’t get the flying cars promised in Back To The Future Part II but this is a fine consolation prize. It tickles me to no end that I can waltz down the street, hop in a car, pick up a wonderful companion, and zip up to the mountains…

… and that’s exactly how I’d been using the cars.

Today, I was going alone – on a special mission.

You could say it was a reunion.

Between six and seven years ago, I made a weekly journey to Rooney Road Trailhead. Once there, I selected one of the small but steep hills just off the trail and sprinted up.

It kicked my ass.

The first couple visits ended with me collapsed on the grass, staring up at the clouds, trying to catch my breath.

The sprints gave me a bit of grounding as I stumbled through my life, barely conscious and barreling towards a bankruptcy.

Then I got the gig as a sign-spinner. Because I’d be on my feet outside for almost 40 hours per week, I figured it was probably a good time to take a break from sprints.

Just before beginning my job, I took one last trip to the hill. While savoring everything, I thought about my eventual return. For some reason, I decided to vow I’d be financially successful before coming back to sprint again. What did that mean? I batted around incomes like $5000 per month or $10,000 per month. Really, I just wanted more money to flow in than out, as consistent as a river, living the life I wanted while doing what I loved to do.

“I’ll return…” I said to the hill six years ago.

Through a season of oppressive summer heat…

A whole year flew by…

Every now and then, I imagined returning to that hill.

The business closed and I jumped into a new job as a truck loader. Back-breaking. I scrambled for a way out.

Several months later, I caught my lifeline… and bear-hugged it and climbed it as fast as I could.

I moved to Baltimore for a year and a half.

Then I returned to Denver. Still thinking about that hill. But even though I’d fulfilled my requirements and could officially return, I still didn’t go. On the surface, I didn’t want to deal with the hassle of venturing to Rooney Road Trailhead without a car of my own. But maybe things had to align at a deeper level?

Who knows. Another two years passed.

Then, finally, after starting a wonderful relationship and figuring I could use this nifty car rental service, I returned to the hill.

Six years. I was surprised to see some changes. Some tents were set up for a dirt bike place or something across the street. “Isn’t that crazy? In six years they managed to put up a tent! How things change!” I chided myself.

But the hills were the same.

I walked off trail, watching the grass ripple in the wind like gentle waves on a lake.

Everything shimmered a lush green.

I found my hill.

Said to it, “It’s been four years. No, wait, six years. Wow, six years! And I did just what I said I would. Even better, in fact. It’s so good to be back. Six years is a blink of an eye for you. But I’m honored to be part of the blink.”

As I dug in, preparing to blast off, I said, “It’s amazing what happened in those six years. I’m going to enjoy what the next six years bring. I’m enjoying… right now.”

With that, I charged up the hill. And remembered why it kicked my ass so much.

“Hmmm, maybe this wasn’t the particular slope I sprinted up.”

At the top, I walked to another section and eased back down. Yeah, that seemed more like it. So I sprinted up that part four times – adding a rep compared to six years ago. And I didn’t have to collapse in a heap, at the top. Progress!

As I stepped through the grass back to my car, I spotted a reminder that my life’s just a blink for the hill:

And said hi to a friend who wished me well: 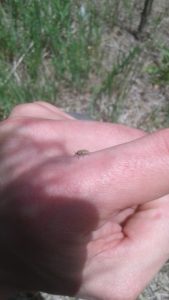 Then I got back to my rented car, reached into my pocket… and discovered the key was missing.

“Ah. It probably fell out of my pants as I sprinted. I’ll just retrace my steps,” I thought.

Funny, because earlier I’d checked my pants a couple times to make sure they were still there. But I realized my mistake – I was probably feeling just my apartment keys.

Six years previous, I made a habit of putting all my stuff into a bag and leaving it at the bottom of the hill. Good idea. And I usually ran in shorts with zippers. Another good idea… for next time.

I returned to the hill… and couldn’t quite figure out the path I took. And there were technically two. “Was it over here? Yeah that looks familiar. Well, let’s just dive in.”

For almost an hour and a half in the 90-degree heat and Colorado sun, I paced up and down the hill, repeating, “I’m finding my key.”

At no point did I feel angry, frustrated, worried, or any other negative emotion. Mostly, while peering around the ground, I thought about how I preferred losing the fob compared to my phone or wallet. Or hurting myself. Or a snake biting me. All in all, a good day. I even called Car2Go to see if they could make the fob beep.

While doing this, I pondered: Could I be unfailingly polite on the phone, even in this situation? Other than the tiniest bit of frustration when the wind broke up our call – which meant only that I lost my sense of humor for a moment – I succeeded. The company was apologetic about my situation. But hey, I lost the key.

The dull dryness of growing sunburns creeped around my arms and neck. Even after a brief meditation to get me in the flow, the key was nowhere to be found. It felt right to end the search, so I grabbed an Uber home. Car2Go would have to charge me for a new fob and the tow.

“If a problem can be solved by money, it’s not a problem,” I thought.

Would I have dealt with this situation the same way, six years ago?

Just a couple days before, I’d gone to the Mimosa Mastermind in Scottsdale. Both to learn how to build an affiliate marketing program and to teach copywriting. During the trip, I had felt upgraded on a spiritual level.

After losing the key fob, I mused how those upgrades almost always involve pain. Whether earth-shattering or little annoyances. So I was glad to say, “See universe? I lost the key fob but I still feel great! Neener neener!” and do a fun little dance.

Perhaps I was meant to visit the hill and lose that key. Just as I returned to fulfill a promise, the universe lobbed me a little test to see if I were ready for more. Perhaps I knocked it out of the park.

Was bankrupt. Now financially free. Was depressed. Now happy and fulfilled. Was figuring out how to change his life. Now writing how he did it.